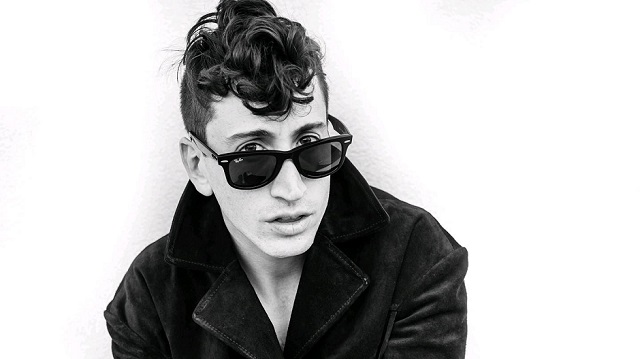 “I’m here to drag rock and roll into the 21st century kicking and screaming if I have to.” says Des Rocs. “It’s what I was put on this Earth to do.”

If that sounds ambitious for a skinny misfit from New York, consider the following: in the three years since Des Rocs first began releasing songs from his NYC bedroom, he’s racked up more than 150 million streams, cracked the Top 30 at Alternative Radio, and even opened for the Rolling Stones. Now, he’s ready to once again elevate and evolve with the release of his pulse-pounding, genre-bending, full-length debut, A Real Good Person In A Real Bad Place. Self-recorded in Des’ homemade studio, the album is a bold and intoxicating slice of bedroom arena rock fueled by defiant, magnetic performances that hint at everything from Freddie Mercury to Elvis Presley. It’s a collection that’s as addictive as it is unpredictable, a wild, cathartic work of liberation and escapism that thrives on breaking the rules and subverting expectations at every turn.

A fourth-generation New Yorker, Des began his career playing in a variety of groups that toured with the likes of Weezer, Fall Out Boy, and Panic! At The Disco before going solo in 2018 with his debut EP, Let The Vultures In, which amassed more than 50 million streams on Spotify alone. He followed it up with two similarly well-received EPs, 2019’s Martyr Parade and 2020’s This Is Our Life, which helped earn him dates with Muse, Grandson, The Struts, and The Glorious Sons, among others.